Horse drawn hearses have three phases in history – before WW1, from the end of WW1 to roughly the end of the 20th Century, and the period since. Let me start with the first.

There was no need for the hearse until way into the early 1700’s, burial grounds were usually local and the coffin was carried by mourners. As the population expanded and people died younger, cities in the UK needed a more professional approach. The wheeled pier was still needed but longer journeys required a horse to pull the carriage – public interest in funerals became intense and the processions became more ornate.

New occupations were created, sometimes by chance! ‘Children should be seen and not heard’ was often said in the past. Mute boys were engaged to be professional mourners – they stood alongside the cortege, looking miserable, paid a pittance, and were known as mutes. They became so popular that they tried to maintain their youth. The tips were good and the more mournful they were, the better the gratuity.

The horses were magnificent in their finest plumage. the most famous hearse still on public view is that of the Duke of Wellington’s funeral in 1852.Weighing 18 tons, the carriage is a tribute to contemporary craftsmanship, it is on view today at Stratfield Saye House. Taking just 18 days to construct, it is made of gun metal from Napoleon’s defeated 1815 army. There are no photos of the funeral, photography had only just been invented but it must have taken quite a lot of horses to pull it through London’s streets.

The railways were developing, inner city cemeteries were filling, outer ones were being created close to the railway line, new stations were erected.  The funeral hearse was then needed twice; once to transport from church to station, then from cemetery station to graveside.

Horse drawn hearses played an important role, a new job of carriage master was created. The hearse would be very similar to those we see today, glass sided so all could see the importance of the deceased, black for mourning with horses to match.

The more ornate it was, the better. Velvet curtains, glass painted with flowers, intricate scroll work, a high bier so mourners could see inside… The horses were prepared to a high standard of presentation, with black blankets scrubbed, manes brushed, lovingly prepared for all to see. The more money that was spent, the better the ‘do’. People in terraced streets would remember for years if the funeral had been a good one, if parsimony (unwillingness to spend money) the family would be spoken about with pursed lips behind hands.

1909 saw the beginning of a transition. The body of a horse–drawn hearse and the chassis of a bus were converted together to make the first motorised custom–built hearse. This was commissioned by a funeral director in Chicago, in the USA.

During WW1 horses were in great demand in France, motorised transport was developed and when peace returned, the hearses were mixed. The wealthier city dwellers preferring the new mode; the poorer, horse drawn hearses. Prestige in death. Gradually the horse drawn hearses declined – economics played a role. It was expensive to maintain stables and petrol hearses were far easier to maintain, they were also useful when transporting the coffin carriers too. This was a period when ostentation was less important than before. Horses were not kept for funerals, but for agriculture. The urban stables fell to decline and horses were kept for agricultural purposes rather than funereal. More attention, and expense was directed to coffins, flowers and most important of all, the wake.

More recently, the media has revived interest in horses playing a role in the funeral. Bizarrely criminals’ funerals have always created huge interest, the more notoriety, the more publicity and, if their demise was violent, then better still. Ostentation was not optional and horses had a huge role to play. The return of the very specialised role of a traditional carriage master was gradual but is not dissimilar to that of 200 years ago. No mutes of course but still plenty of professional mourners.

We have all seen the same faces in the crowd lining the procession route – they are there to see the magnificent horses in their finery. This role nowadays is only possible with the support of motorised back-up, transporting horse and carriage to close to the start of the funeral route.

I can’t finish this article without my own wry recollection of a horse-drawn funeral. It would have been in 1991, south-east London, ten limousines hired as well as the hearse. I was at the start of my time as a limousine proprietor, hired at a fixed fee for two hours, overtime extra. When the hearse arrived at the house, the funeral director was dismayed to see that the waiting coffin in the house taken in the night before was in fact a casket, far too large for the smaller hearse, far too heavy for the two horses. Another hearse was ordered, taking two hours to arrive, with more horses. The overtime bill was huge, lesson learned. Look after the horses, they will look after you. 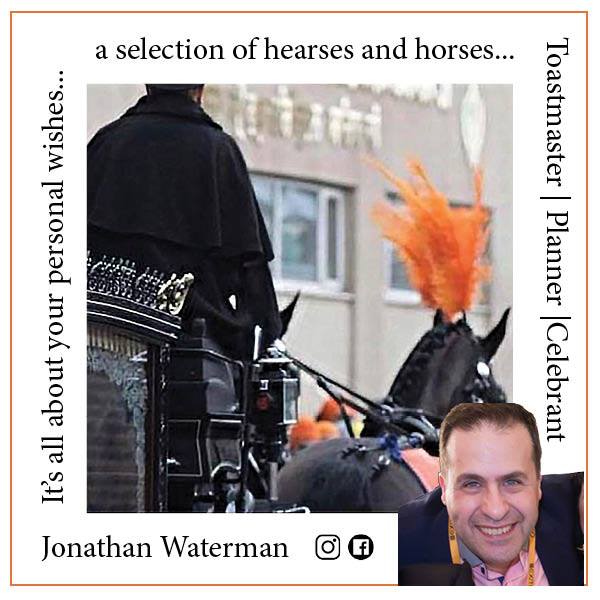