The Final Bill – What Are Professional Services?

So the funeral was last week, the flowers sent by loved ones are starting to fade, you know it is time to take the sympathy cards down and the phone doesn’t seem to be ringing quite as much as it did before you said goodbye to your loved one.

As the clock ticks in a silent room, you start to accept that life has to go on; that there are things to ‘sort out’. All the official stuff (letters to write, places to present the death certificate to – not to mention clearing out drawers, emptying boxes. You hear the sound of the post dropping through the letterbox and there amongst the letters from people who don’t yet know your loved one is no longer with us, is the invoice from the funeral director. Exquisitely presented in a crisp, white, classy envelope. You knew it was coming and yet somehow it all seems so impersonal, to see such a personal day itemised – coffin, flowers, interment fees, legal expenses, professional services. 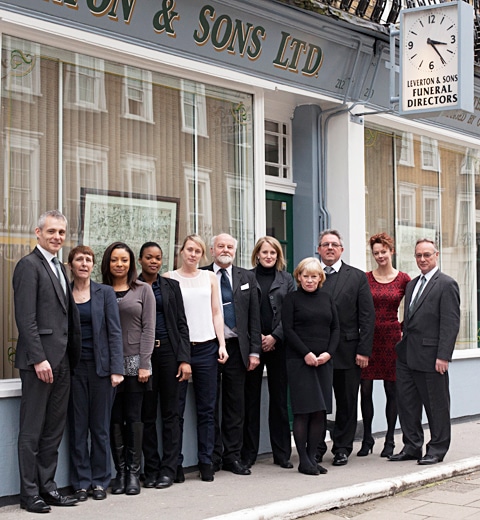 Having planned our mum’s funeral some years ago, I remember wondering what ‘professional services’ actually meant. The funeral directors had picked her up, took her away for a few days, ‘prepared’ her body to come back home in a coffin that was far too big for her little body and then came back a week later to ‘deliver’ her first to the local church and then on the crematorium. They dropped us off at her church hall for drinks and food with friends and family. Nothing out of the ordinary, or so I thought.

Speaking to so many funeral directors whilst helping to put this magazine together for Rosie and the Natural Death Centre, I thought it would be useful to do a days work experience with a funeral director and asked if I could spend the day with Levertons in London.

Levertons is a very old, established family run firm in North London with generations of experience and an extensive list of funerals of the rich and famous under their belts – quite literally from prince to pauper.

I was under the direction of Richard Putt and would attend the funeral of a gentleman who had passed away from cancer a couple of weeks earlier.

The morning was spent with Lori, being shown the morgue, the chapel, the prayer room, the flower room, the office – the mechanics of the company. The facilities were exceptional, a choice of chapels for different faiths, a room where the family can spend the night before the funeral with the body.

The care and attention to detail spent on each funeral, helped me understand the complexity of organising such a detailed ceremony (with no room for a rehearsal) and making sure all the pieces of the jigsaw are flawlessly in place. Some people are cremated, some buried, some families want flowers, some donations. Sometimes the families are at war and diplomatic skills are crucial. Some are deeply religious, others not at all. Funerals can take place in churches, public places, natural burial grounds, some prefer the traditional hearse, others want a horse drawn cart, some a Harley Davidson with a side car. The variations are endless and with five funerals a day to be organized, I was very impressed at how every single client was spoken to as if there was no other funeral arranged that week leaving them feeling important, valued and respected. Funerals are entered into a large ledger rather than let the client hear the clicking of a computer keyboard – old school, and it works. Having an address book with all the right contacts, knowing who to call and what to ask for is imperative and something only time and experience can deliver. A happy office full of committed, capable and very real, very warm people.

At 12.45pm Richard put his suit jacket and his funeral director’s overcoat and hat on, polished his shoes with a little sponge (a long established habit I guessed) and picked up his top hat and cane. It was almost like when a clown puts on his red nose (sorry Richard!) and is ready for his performance and yet this was no circus act. It was an important moment in the lives of the deceased’s family and the show had begun.

With a little trepidation, I sat in the back of the hearse with a man I didn’t know in a coffin behind me. The smell of lilies and leather was powerful – a quiet moment for contemplation. So much time was taken to dress the hearse and make sure the right flowers were on top of the coffin, the rest were arranged on the roof.

Richard and his driver had a photo of the man on the dashboard of the car. They spoke of him with such familiarity, I wasn’t sure if they knew him personally but they spoke of him with reverence and I kind of knew, that stranger or friend would receive the same respect and level of ‘professional service’.

For the next two hours, Richard Putt and his team belonged to that family. Everything he did was with the family in mind. Navigating London traffic, walking in front of the hearse for part of the way (stirring personal memories of my mum’s funeral), checking everything was running smoothly in the crematorium, helping people to their seats, the grandchildren to place flowers on their granddad’s coffin, taking part in the service singing and praying. I felt quite humble witnessing his ‘performance’ and deeply touched to be able to help serve people at their most vulnerable. I struggled to hold back the tears as the coffin was carried into the chapel. Why do we cry at funerals of people we don’t know that well?

One of the drivers told me, ‘We have done our job properly if no-one has noticed us’.

At the end of the service Richard gave the widow his arm and gently led her from the chapel to the cards and flowers waiting outside in the sunshine. He collected the cards for her to take home.

Driving back to Leverton’s Head Office afterwards in an empty hearse in the heart of London, the noise and bustle of the city all around me. It struck me how transient life is – a fleeting moment on this earth, that’s all and yet every single life can make such a huge impact on others. It is so important the end of each life is marked and celebrated in a farewell ritual.

Not many people would want to be a funeral director, even fewer would have the capacity for it. When the light is snuffed out on our loved ones, funeral directors step forward from the shadows and help us prepare for that final goodbye. They are unsung heroes.

Since my day in London, I have been told I witnessed ‘the cream’ of the funeral industry and that not all firms have the same standards. I find this very sad and yet what a benchmark they have set.

I hope it is a long time before I have to open another funeral director’s invoice but when I do, it will be with a greater understanding of just what ‘professional services’ really are.

Facebook
Twitter
Linkedin
Previous articleWendy Clarkson: We Should Involve The Children
Next articleYour Life Is Special – Shouldn’t Your Funeral Be Too?
- Advertisement -