Sometimes it is really hard not to laugh when involved in a funeral. When in London, we had Anton Karas playing his zither at the back of the church as the coffin was carried in. He composed the theme to the 1948 movie The Third Man, starring Orson Welles and Joseph Cotton. The theme is insistent, and if you are carrying a coffin your step immediately follows the insistent beat. It is called the Harry Lime theme, named after the main character, and the four men were bouncing the coffin on their shoulders as they walked along in time. Everyone was laughing by the time the coffin was placed on the trestles.

As a celebrant I took the crematorium service of an elderly lady, and at the end of the life story, when I was praising her, a six–week–old baby in the front row loudly broke wind. Loud guffawing laughter, I said ‘every one is a critic’, and carried on.

As funeral professionals, we all have incidents where we wanted to burst out laughing, but instead had to imagine we were sucking lemons.

In the late 1970s I was a bearer at an interment at the London Road Cemetery, Mitcham, in South London. The elderly lady who had died had four very chic daughters, all trying to out-do each other in grief levels. The priest had left by the time the three gravediggers had commenced, the daughters were all dressed in furs, high patent heels, short black skirts, white blouses, ostentatious jewellery, immaculate hair and make-up to match. The eldest wanted to show a more public display of grief, so she snatched a shovel from one of the gravediggers and starting to ‘fill in’ with the others.

Daughter number two wasn’t to be outdone, taking another spade. Number three was soon alongside, so daughter four, no implement, shoved number one in the back, landing on her front in the earth. She jumped up and in the ensuing melee one ended in the grave, two had spades hit across their backs and they all got thoroughly dirty. The men just stood observing, it was far too dangerous to get involved. Then, it was back into the waiting limousines.

The older limousines had sliding partitions, I would leave mine slightly open behind my right ear. One journey went like this:-

‘Why did you get his car? I’m the oldest, it should have been mine.’
‘If you’d bothered going to see him more than once every Boxing Day you’d have maybe got it. I saw him every Sunday, he came round to me for lunch, what did you do?’
‘Yes, but at least I have the house.’
‘Ah, but I have the contents. That includes all the shares.’

It then went quiet.

I started as a chauffeur bearer in 1977, the hearses were pretty basic in those days, you only had two front doors. The inside consisted of the bier which was the length of the vehicle, fold-up seats either side so bearers could get to the seats in the very back, by the rear flap for the coffin to enter. When you sat in those back corner seats no-one inside could see you. The acoustics were poor so you couldn’t join in the conversation from the front. We took the coffin into church at 5pm on a dark Winter’s evening, the journey on the way back to the garage was boring, so I nodded off. The driver saw me snoozing, nudged the conductor next to him, and did an emergency stop. I ended up on the floor, under the bier. I was not a happy funeral operative.

As a conductor with three limousines, we reported at the house. The family was somewhat agitated because half an hour previously a hearse and three limousines from another company had arrived and started to load flowers. They were stopped when mourners from a house half–way down the other side of road walked up and informed them they were at the wrong address. There are mistakes, and there’s incompetence.

There was a lovely man called Harold Longhurst. He was close to retirement and I learned a lot from him. I was the conductor on a Friday funeral to Oxford Crematorium. We were about twenty miles short when he informed me that we had a flat tyre. Harold was an older man, I was considerably younger, so I rolled up my sleeves as he watched – it took about quarter of an hour to change the wheel. I had dirty hands, but no problem, as Harold was ‘old school’, he produced soap, water, and paper towels – no-one was any the wiser, all went well. Monday morning, Harold was in the garage talking to the rest of the crews.

‘Harry, can you come over here please.’
‘Yes Harold.’
‘Harry, on Friday, when we went to Oxford, did we have a problem?
‘Yes, we had a flat tyre, which I changed in under a quarter of an hour.’ I said proudly.
‘Did you watch the grand prix yesterday.’ I nodded.

‘And how long did it take them to change four tyres?’ Silence.

‘Under five seconds.’
Deflated, I exited to the sound of ringing laughter.

Harry Pope has written a book called Buried Secrets, full of amusing anecdotes about his funeral career. £2.99 e-book on Amazon, or £6.99 printed. 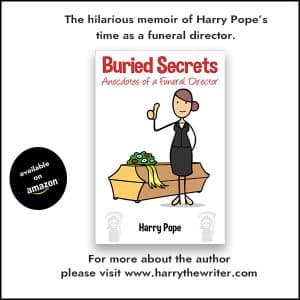 0
Horse drawn hearses have three phases in history – before WW1, from the end of WW1 to roughly the end of the 20th Century,...
Read more