Are there really healthy ways to grieve multiple deaths – it sounds a little too far fetched right? For the past 8 years, I have worked in end of life care, educating health care professionals on how to work with people who are dying and those who are grieving.

I work every day with the losses of others while at the same time privately attending to my own. In February I ended my relationship of three years and moved out of my ex-partners home.

In April my beautiful grandmother died.

A few days after that my Dad became seriously ill.

Last Sunday the woman I’ve spent over a year working with as a volunteer at a local care home died.

Logically we all know that loss and grief are a part of life.

But that amount of loss and grief in such a short space of time can overwhelm even the most resilient of us.

How can we cope when we’re hit by not one but multiple losses?

I hope that in sharing my strategies they may prove helpful to those of you going through similar experiences.

While it sounds like I’m stating the obvious it can be easy to sweep our feelings under the carpet, to think that we’ll deal with our pain later on when things quieten down.

But we rarely do.

Instead, we treat our pain like we treat packing for a vacation.

We pile our latest loss on top of all the other losses we’ve suffered across our lifetime, sitting on top of the suitcase in a desperate attempt to fasten the latch and keep it from spilling out across the floor.

We need to learn a better way of packing.

One that involves taking the time to pay attention to each item we’re putting into our suitcase. To gently fold it and place it in a space that is big enough to hold it.

A space where we can easily find it again one day should we wish to reflect on the important role it played on our travels through this life.

Most of us don’t like pain, it’s normal to want to avoid suffering.

But feeling our grief when it comes is the only way we can keep up with the losses that we face throughout our life.

If we deal with the waves as they roll in, rather than numbing ourselves to them, then we also create space to fully embrace the joyful moments of life.

As Brene Brown so beautifully points out:

‘We cannot selectively numb emotions, when we numb the painful emotions, we also numb the positive emotions.”

So as hard as it is, we must feel our pain.

If we don’t do it now, you can be sure we’ll have to do it later.

Own Your Right To Grieve

When I was 24, I moved from New Zealand to Canada on a working holiday.

Having grown up alongside a sibling who had Cystic Fibrosis I needed some time away to live in a world that didn’t revolve around illness.

I had an amazing four months and was about to start a new winter contract when I received a call that my sister had just undergone a double lung transplant.

I don’t regret that decision or my subsequent one to not return to Canada and instead remain in New Zealand so I could be close to her.

That decision gave me three precious years with her before she died that I would not have had if I had decided to leave again.

But that’s not to say that I didn’t grieve that loss deeply.

That I didn’t grieve my new life, the friends I had made, and the adventures I had.

I grieved the loss of the future I thought I was going to have for a long time and I grieved it alone because that sort of grief just isn’t recognised by society.

It is almost universally acknowledged that we have a legitimate right to grieve if someone we love has died.

But that’s just about the only type of loss that society is in agreement on.

Grieving the death of a pet, the death of someone with whom we had a challenging relationship, a stillbirth, a miscarriage, an abortion, a divorce, a break-up that we initiated, the end of a friendship, a retirement, your children leaving home, a redundancy, or moving to another country, are all met with varying responses ranging from skepticism to dismissal, from tolerance to understanding.

For the most part, society does not recognise the many losses we face over our lifetime that may trigger a grief response.

Rather, any loss that is significant in your life, that you view as a loss and that you’re grieving for, then that grief is legitimate. End of story.

It doesn’t matter what other people say, you have a right to feel whatever it is that you’re feeling.

Own your right to grieve.

There is no rule book. There is no time frame. Grief is as individual as our footprints.

Do What Works For You

Self-care has been one of the big buzz-words for the 21st century. But it’s not a one-size-its-all approach. Therapy has always worked well for me because I love to talk things out. Walking somewhere peaceful is also something I find therapeutic because it helps me process things and clear my thoughts.

Devouring personal development books helps a lot too because I love to read, and learn from, other people’s experiences.

But these things don’t work for everyone.

Just like a vigorous work-out in a gym where I unleash all my pain onto a punchbag or dancing it out to loud music, wouldn’t work for me.

Find the things that work for you and do them regularly

That might be spending a ton of time cuddling your dog if you have one or joining your children on the swings at the local park.

It might be taking a long bath or curling up with a cup of tea.

Maybe it’s baking or cooking that helps you to de-stress or spending time with close friends.

It could be sewing or painting or swimming.

Whatever they are, find the things that bring some calmness to the chaos, that help you feel moments of joy and peace, no matter how fleeting they are in the beginning.

You Will Get Through This

Coping with one loss can take all the physical, emotional, mental and spiritual resources we have. Coping with multiple losses within a short space of time can be enough to bring us to our knees.

While it may not feel like it at the time, most of us handle these losses so much better than we give ourselves credit for.

We are far more courageous than we believe ourselves to be.

Far more resilient than we think we are.

We learn. We grow. We adapt. We keep going.

For most of us, our desire to continue living is stronger than our pain.

It’s that desire that drives us forward.

It’s that desire that makes us want to take our pain and use it in a way that helps others.

While it may not feeling like it right now you will get through this.

This is one season. One chapter in the book that is your life.

Own your right to grieve.

Do what works for you.

And then take what those losses taught you, what your grief taught you, and use it to bring light into another person’s darkness. 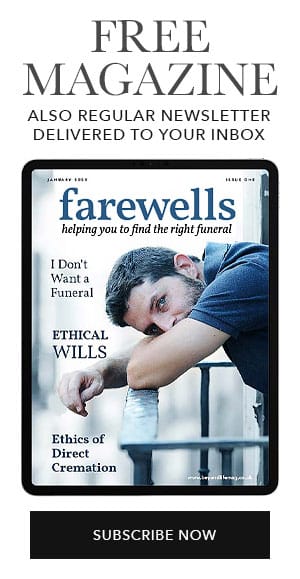 0
Ethical Wills are used to pass on personal values, beliefs, blessings, and advice to future generations. It is a way to tell stories and...
Read more
Edition 1

0
Things between relatives can become tense. Many people are now making an Advance Directive which stipulates what kind of end of life care they would...
Read more
Edition 1

0
We are all going to reach the same conclusion to our lives in the end. It is I’m afraid, a ‘when’ not ‘if’ the...
Read more
Edition 1

The Funeral Profession: the Frontline Nobody Is Talking About

0
In these extraordinary and troubling times, a lot of attention is (rightly) being paid to the ‘frontline’ services – those people who can’t work...
Read more

0
How the death of a parent affects a child. Nicky Fuchs got her first period at her mother’s funeral when she was 11. A few...
Read more