Beyond Goodbye – A Father’s Tribute To His Son

Although close playmates through out their childhood, they had grown apart since we moved away from London, their friendship still strong but mainly exchanged via Facebook. They probably hadn’t seen each other in the flesh for over a year when Josh was killed in a road accident whilst travelling in South East Asia. He was 22.

Now we are standing by Josh’s tree, a young copper beech, planted in his memory and for which Jessica had performed a song she had specially composed for the occasion and which talks of her sadness of not making more of an effort to stay in touch. We share her regrets but in her remark we also realise that in some ways, life after death on the internet is not that much different from life before. 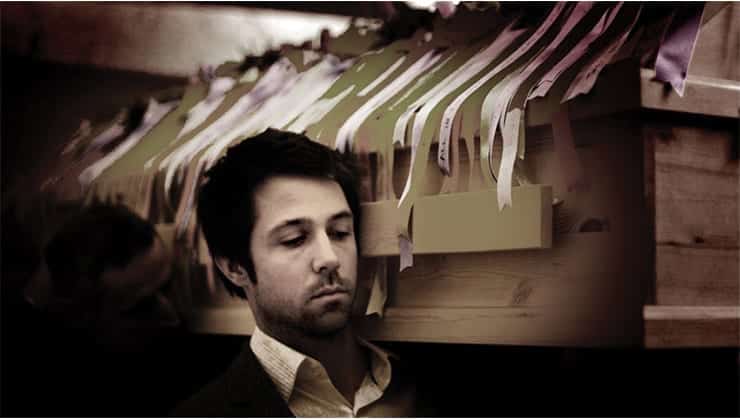 Josh’s Facebook page for instance is still very active; although he can no longer contribute, his on-line identity is still such that messages to him and postings on his ‘wall’ are an almost everyday occurrence. Time was when photography was the principle way of keeping memories of our loved ones alive – their living likeness in snapshot or portrait helping us to recall a moment, a story, a life.

Now alongside these visual traces we have an internet and a cyberspace in which it seems their very spirit can continue forever…. a technological heaven in more ways than one. The day after Josh died, a work colleague of his blogged about how he was on the train to work when he heard the news. “It wasn’t long before my feed was full of shocked comments from friends we shared…” wrote Tom Kihl. “Many in society will take some convincing about this new way of dealing with death and grief … grief aired publicly, immediately, emotively…”   But for all the scare stories about social networks eroding cultural values, Kihl believes they still offer a very traditional form of support during difficult times. “The number of people who changed their profile picture to one of themselves and Josh was a silent but incredibly powerful statement.”

Looking back now on Josh’s timeline, reading again all the posts in the days and weeks that followed his death, we get a sense of a huge community carrying a collective grief and a collective memory. But it is the way in which his friends (how we all) now message him – always addressing him as ‘you’ – that is so striking. Here are no ‘sincere’ notices of condolence as would previously be found in obituary columns – no, these are direct, spontaneous and intensely personal messages often abbreviated into text speak, but which represent a continuing outpouring of love and sadness that somehow connects all who grieve for him. And we are not so much writing but talking to Josh – talking to him as if he were still alive on the ‘other side’ so to speak – and this is very much a shared conversation the ‘you’ singular has somehow become ‘you’ plural. This way of communicating is something we have come to know only since Josh died.

It has massively informed the way in which we have been able to grieve for our son. It started with his funeral. To receive so many ‘instant’ messages from Josh’s friends most of whom we hardly knew (and many not at all), meant that in order to honour him and to remember him in a way that would respect this sense of his still being around for so many people, his funeral had to be as inclusive and as celebratory as possible. 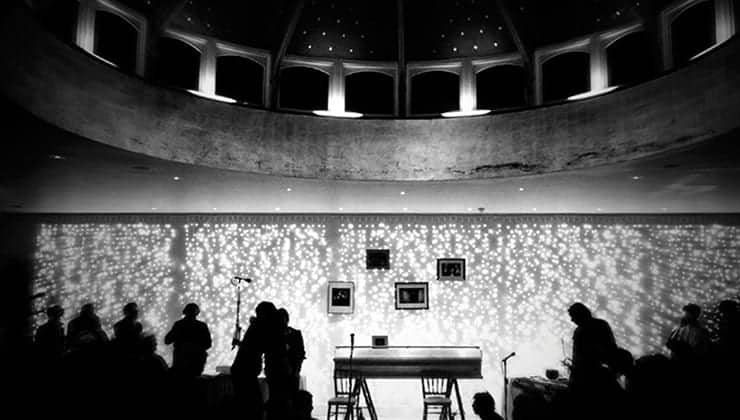 But it was more contemporary ideas about how to arrange a ceremony, as much a funeral rite as a celebration of life, that helped us create an event that would be properly meaningful for both young and old, for family and for friends. The first of these ideas is that you don’t need to stick to convention – there are actually ‘no rules’. The second idea is that creative participation, collective as well as personal, is the key to something that we hadn’t fully appreciated at the time; by creating our own special ceremony for Josh, call it a funeral or a celebration of life or whatever, we were ensuring that the day became part of the start of a mourning journey rather than an act of closure.

There were solemn moments and there were joyous moments, many tears and much laughter, contributions in song, word and deed. We built our own coffin, designed so that we could tie on ribbons with our own personal messages: we made video tributes and photo slide shows: the event itself was split into three distinct sections with portage of the coffin marking each stage and creating a symbolic journey as Josh was carried into, through and out of our presence. Then there was the viral candle lighting ceremony in which we, Josh parents and his brother and sister, lit and passed a flame to our neighbour who then passed it on, so that within minutes the room was filled with tiny lights each symbolising a desire to carry Josh’s spirit with us and to keep his influence alive in our lives.

The decision to record and make a film about Josh’s funeral was prompted by our need for a lasting tribute to Josh, as well as providing a container in which our feelings of loss could be expressed. ‘Beyond Goodbye’ seemed like an appropriate title, given that we had had no opportunity to actually bid farewell, but we also chose it because of the possibilities that the internet offers as a means of staying in touch with all who knew him and in whom that spark of Josh still exists.
BEYOND GOODBYE is now a website, a blog, and a place where we can host the film, collect photos, poems and various musings. 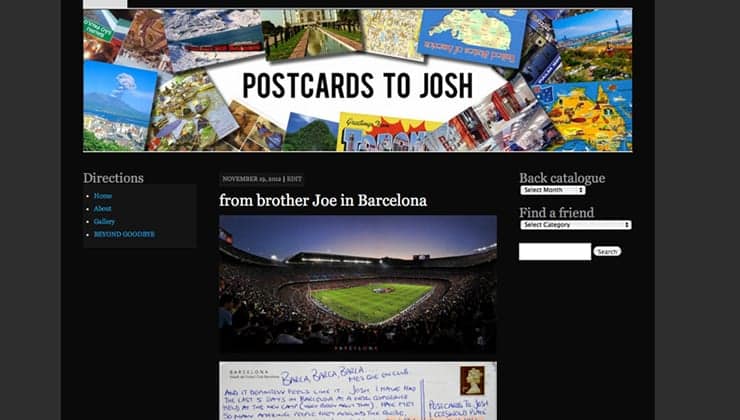 As such it has become a vital part of our journey through grief. For us this is a necessarily creative journey as we re-invent our relationship with Joshua. As well as the film, Jimmy has also self published a photographic essay ‘Released’ in which he has used photographs of Josh to reflect on the way we use the medium in the process of mourning. Again this has only become a possibility as we have entered the digital age, but it is the on-going exchanges that seem to have most power.

Josh was in Vietnam when he was killed, and in our parallel website POSTCARDS TO JOSH, friends and family are invited to send old style snail-mail greetings from their travels. Nearly two years down the line and Postcards to Josh, has a constant flow of messages from all five continents. It’s a place where we can tell Josh what we’re up to and to share stories and memories with one another. As a resource the internet is infinite or so it seems. As a dimension it has added powerfully to our lives. But our deaths have been enhanced too.

If our website and Josh’s Facebook page provide an ever-evolving testament to his life they are also a conduit by which we can all come together in new relationships that have Josh at their centre. We suspect this is what Jessica meant when she said “People don’t really die on line.” Jimmy Edmonds and Jane Harris   © 2012 Beyond Goodbye  Beyond Goodbye recently won the Award for Best Internet Bereavement Resource at the Joy of Death Festival 2012.

Facebook
Twitter
Linkedin
Previous articleCharles Cowling: Observations of Funeralworld
Next articlePeter Owen Jones: The Church And Its Attitude To This Sacred Earth
- Advertisement -

0
There’s a public footpath alongside the yard of my funeral home and after many years of washing the vehicles out there I’ve lost count...
Read more

Funeral Limousines I Have Driven