‘In December of 2007, having been diagnosed with Motor Neurone Disease, a fatal, debilitating and incurable illness, Carla Zilbersmith’s last wish became the need to leave those she loved laughing.

Shortly after this diagnosis, I began a fascinating experiment; could I accept with as little regret as possible the fact that I was dying while simultaneously falling madly in love with life? After all, don’t we miss the things we love the most? How can losing a life so treasured be something to embrace rather than resist? Luckily for me, ALS parcels out death in tiny packages. Motor neurons gradually die, starving the muscles and resulting in complete loss of bodily function. 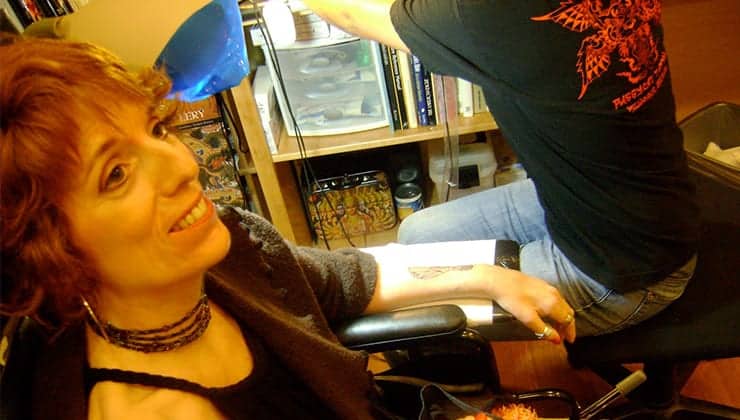 In my case, I first lost the use of my legs and one hand. I walked with a cane. I fell down and broke bones. I could no longer buckle a shoe or a bra strap. Soon, the falls became increasingly violent. I would fall backwards like Wile E Coyote after the Road Runner dropped a piano on his head. (I know this is not a scientific account; however, ‘cartoonish’ is the most accurate way to describe the way in which one falls as a result of ALS.) These falls eventually led to my permanent incarceration in a wheelchair.

Death by tiny death, I absorbed each blow and prepared for the next one.

As far as I was concerned, I was taking hits like Muhammed Ali, playing rope-a-dope with ALS. I believed I would ultimately rain pain down on this motherfucking disease by refusing to let it kill my spirit. This was, perhaps, a tad optimistic on my part. Soon, I could no longer dress myself, get myself on the toilet, or feed myself.

Now, I can only eat blended foods, and I’m on more drugs than John Belushi, Janis Joplin, and Heath Ledger combined. My speech is rapidly deteriorating as the muscles in my mouth lose the battle to ALS. I’m in hospice and I will most likely die within months, maybe weeks.

A series of little deaths, each of them a rehearsal for my grand finale. This seems to be an appropriate way to view this process, since all my life, I have been a performer…”

Carla Zilbersmith was an actress, theatre director, singer and comedienne, mother to her teenage son Maclen (‘the only one I know of’) who was diagnosed on 26 December 2007 with ALS, Lou Gehrig’s disease, or Motor Neurone Disease as it is known in the UK.

Her hilarious, brave and foulmouthed blog ‘Carlamuses’ which documented her short, one-sided battle with this most awful of diseases. http://carlamuses.blogspot.co.uk

Facebook
Twitter
Linkedin
Previous articleProcessing The Trauma Of Death And Bereavement
Next articleHow I Said Goodbye To My Son, Oscar
- Advertisement -

Memoirs Of A Cotswold Funeral Director

0
James Baker tells us how he came to write “A Life In Death – Memoirs Of A Cotswold Funeral Director”.It wasn’t originally my idea...
Read more

0
As a Funeral Celebrant, I carry with me a constant and very deep sense of privilege when I am invited to view, through an...
Read more

Wendy Clarkson: The Privilege of Being A Celebrant