Have you ever though how wonderful it would be to have your ashes sent off to sea on a lake in a Viking ship? 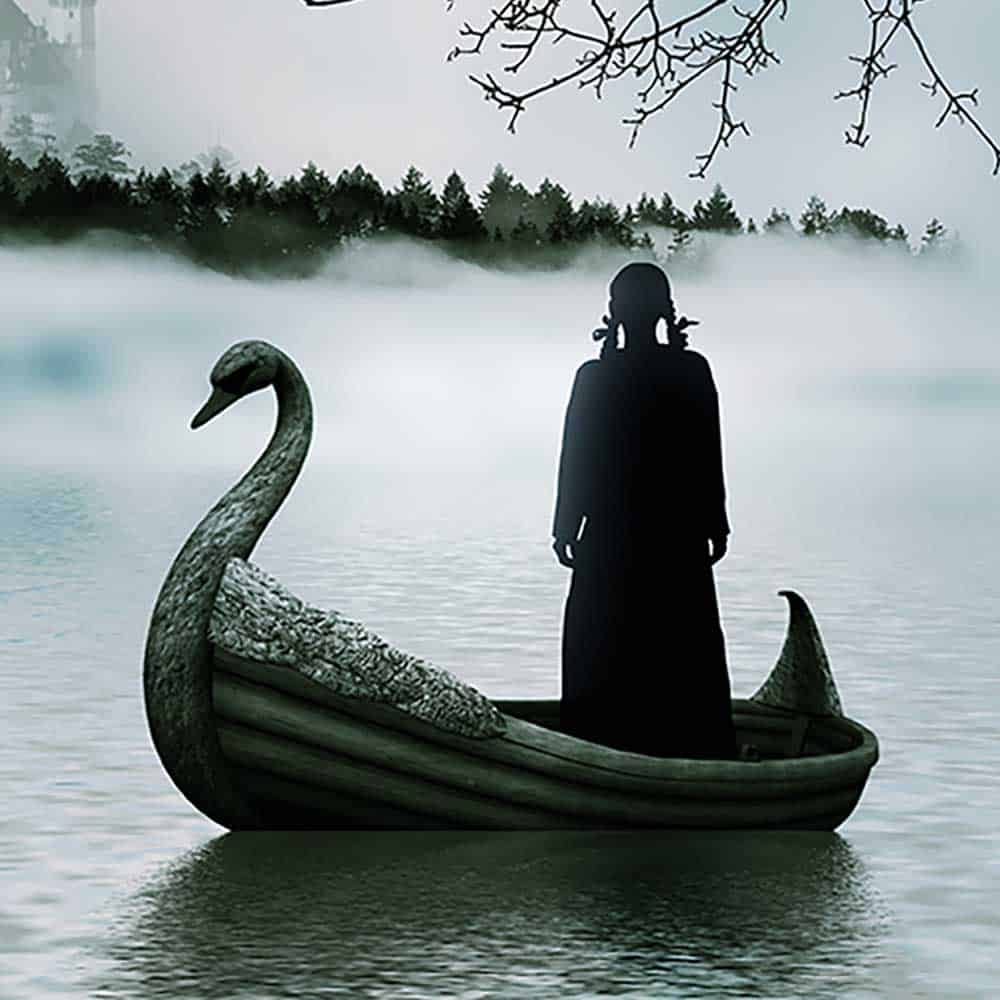 Most Viking Funerals did not actually involve a ship set ablaze and launched at sea, instead they usually involved ship shaped burial plots marked by stones. These tumuli, or burial mounds, can be found in Denmark, Sweden and Norway. However, the burning of the body, usually did take place and was important spiritually. The Norseman believed the hotter the flames and the higher the smoke, the closer their loved one came to Valhalla. It was important for Vikings to send their dead into the inter-life correctly.

Great warriors and members of the aristocracy were often set to rest in their long-ships. Sometimes these long-ships were buried and sometimes they were set on fire and sent off to sea. Vikings were buried with the belongings they may need in the afterlife; weapons or even animals. Sometimes a thrall (slave) was also sacrificed at the burial. The thrall was believed to go with the master into the afterlife to serve him there.

A Tribute to My Brother

My brother died a year earlier. We decided to hold a one-year remembrance for him in this way. Family members came from Europe and The West Coast to participate. Our boating friends were happy to help. 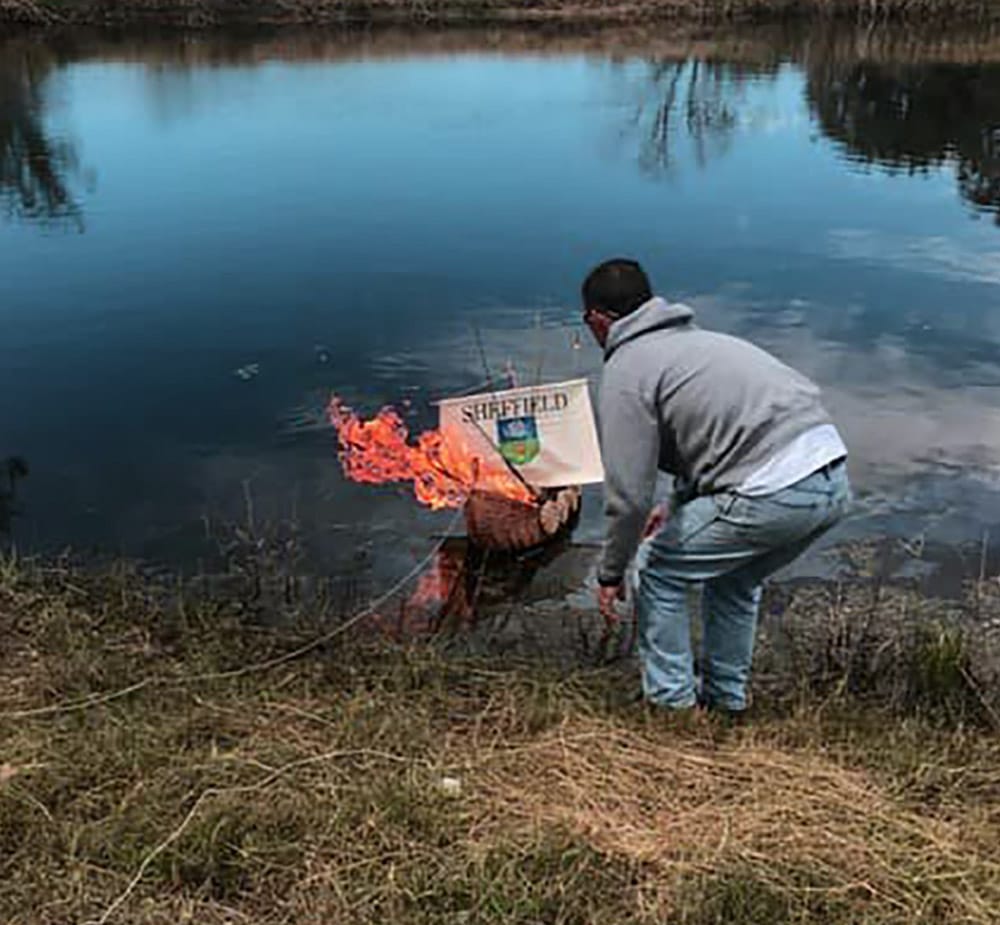 The weather was perfect with light waves less than a foot as we headed out onto the lake in our motorboat. We played a selection of music and welcomed everyone to write private prayers to place in the basket of the boat along with several photos and mementos.

Under way, a seven-jet formation of the Blue Angels the US Navy performance demonstration team, just happened to fly in front of our bow as we motored out to the deep waters of the Great Lake. Less than 300 metres above us, perhaps a kilometre in front of us. The best I can figure, looking at their show schedule, they were flying from one air show location to the next.

The coincidental timing of the fly-by was astounding. Why they were in formation, and so low? Perhaps they decided to give us a ‘show’. A minute timing one way or the other and we would not have crossed paths so closely, so dramatically. They were as modern-day Valkyries. It was truly amazing! We were listening to Wagner’s ‘Ride of the Valkyries’ at the time.

When we reach the memorial location, we launched the Viking boat, setting it afire, said prayers, read poems, read a code of ‘what it means to be a Viking’, listened to Wagner’s ‘Seigfried’s Funeral March’ followed by ‘I Vow to Thee’ as performed at Churchill’s funeral. 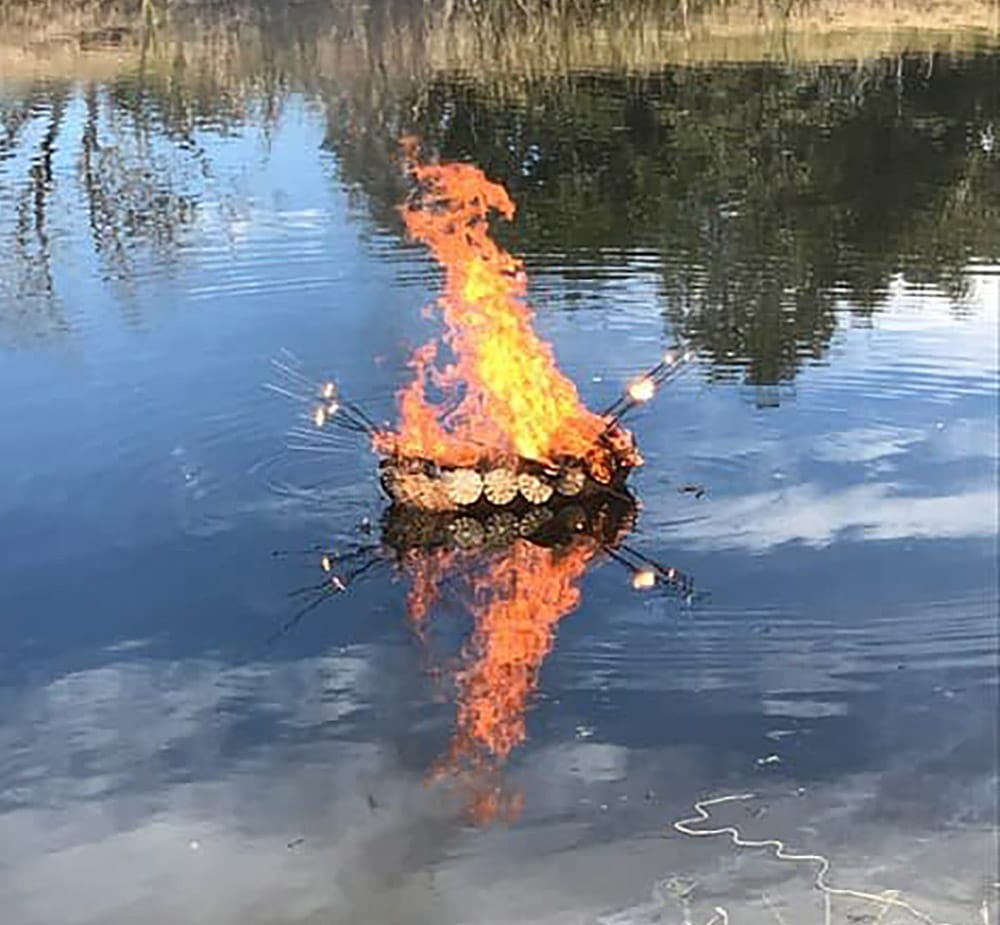 We followed the recommendation of using two bricks as ballast for the boat. Kindling was placed at the bottom of the hill. Larger, 5cm cubes of hickory fuelled the burn. We used the small wood chunks to avoid any dangerous floating debris the larger wood logs could have created. A little bit of lighter fuel helped start the combustion. The ship burned for about half an hour, down to the waterline, and the boat sank out of sight as the water flooded the hull. Thank you for constructing such a ‘seaworthy’ boat.

We continued with the music on the way back to harbour, including Pink Floyd’s ‘Wish You Were Here’ and Bob Marley’s ‘Three Little Birds’.

The coat of arms on the mast has special significance to my brother and me. He had a tattoo if it on his right bicep.

Thank you for helping us fulfil my brother’s last wishes. All who witnessed and participated in the farewell were moved by this most special ceremony. Even the most seasoned boaters said this tribute was unique and exceptional, just as my brother had wanted.

Facebook
Twitter
Linkedin
Previous articleCoronavirus and the Extremely Vulnerable
Next articleIs it Okay to Smile at a Funeral?
- Advertisement -